About a week ago, some dude named Stephen Hunter (okay, he’s actually a Pulitzer-prize winning critic and multi-published thriller author) started an Internet kerfuffle among writers by publishing an article in The Daily Beast called, “If You Want to Write a Book, Write Every Day or Quit Now.”

I’ve written on my mixed feelings about daily writing before. And, I love a good kerfuffle as much as the next girl, so you know I had to check it out.

As for the article: the title is incendiary, the prose hyperbolic, the concept (intentionally, by my read) overly simplistic — and truthfully, told from a place of privilege. And of course the Interweb went mad, with scores of writers coming out to angrily refute the idea that you must write every day (or compete with other writers, or abandon research) to be successful. While everyone else was hating on Kathy Griffin, writers were hating on Stephen Hunter.

If you really want to go down the rabbit hole, I’ve embedded The Daily Beast’s original tweet with the thread of comments. Should you get really bored, simply search on “if you want to write a book,” on Twitter, and you’ll be rewarded with some funny memes of authors riffing on the controversy.

If you want to write a book, write every day or quit now https://t.co/jW4So0zm3F pic.twitter.com/XR3N5lwka0

These writers absolutely have a point. Or two. I get that Hunter’s ultra-competitive attitude about “beating” and “hating” other writers is probably more about his mindset for staying disciplined (and sensationalizing the issue for the article), than it is his actual relationship with other authors. Hopefully. That said, it comes off sounding petty and mean-spirited, and reinforces the old-school publishing model of there being room at the top for only a select few. The mega-bestseller “top” may be small, but the middle is growing like crazy and there is plenty of room for dedicated, high-quality writers of all shapes, sizes, colors and writing styles to find both audience and income. There’s no reason for us to view one another as enemies.

Second point: some people really can’t write every day. The ability to create the habits Hunter describes — i.e., going to your keyboard daily as though you are brushing your teeth, without expending too much emotional energy — is a luxury many early writers don’t have. I can’t tell you how many “successful” writers I know – multi-published, highly acclaimed, well-reviewed, etc. – still depend on a day job or a breadwinning spouse (or both) to support their families. I include myself in this number. If you’re also a parent, you know that no two days are alike with a kids in the house, so putting anything on autopilot is nearly impossible. Sometimes just brushing your teeth and putting on clean clothes feels like a victory. And, as a few of the comments pointed out, writers with disabilities and mental health issues have other barriers to daily writing, which go far beyond Hunter’s glib commentary about dirty socks on the stairs.

Does this mean those of us with children, disabilities or other commitments should follow his advice and throw in the towel? I hope not, because that would deplete the world of some of its best stories and richest voices.

Most people who want to write a book have to put in the work when they can, where they can. Over at The Draft House (an accountability program I co-run for writers who do want to up their game and develop more consistent writing habits), we’ve started a hashtag, #100WordsfromHere. It celebrates the idea of  getting in a few words wherever you can sneak them in. I’ve talked to professional and semi-pro writers who work at their kids’ soccer games, late at night after their families are in bed, on train rides home from their day jobs. I have written (mostly on my phone) in the grocery line, on the MARTA platform, on my lunch break at my day job, in the park while my kids played nearby. I have written at 4:30 a.m. before getting everyone up for school and work; and I have missed those times — “taken a day off,” Hunter would say — when a child was sick or something was going on the night before. Sleep can only be put off for so long.

To be fair, this is what’s problematic about seasoned, successful writers (who started out before the eBook paradigm shift), giving advice to writers trying to gain traction in a new world with new rules. Since Hunter started his writing career in 1971 as a journalist at the Baltimore Sun, I’m going to presume he has been able to devote most of his professional life to writing, something few aspiring writers can claim today. Which isn’t to say he hasn’t earned his chops: journalism is hard, often thankless work, and he started on that path after serving in the military. He appears to have earned many accolades and worked hard for what he’s achieved. The point of his article about slogging away, day in and day out, to gain success is well taken.

That said, the world of writing and publishing has changed (a bit) since Hunter wrote his first novel in 1993. The rules are different. The players are different. The barriers to entry are fewer (which is excellent); but standing out to readers is harder than ever, and publishers don’t support debut or mid-list authors the way they did even a decade ago. You can be semi-successful, highly acclaimed and bust your ass (writing and marketing) for years, and still have to work a non-writing day job. The path Stephen Hunter took to get where he is largely doesn’t exist anymore.

Hunter is giving us his perspective on what works for him, almost 30 years into an established career as a novelist. He’s earned his arrogance, I’ll give him that, but that doesn’t mean his advice is any more useful or true than, say… mine. 🙂

Here’s what I think. Obviously I take issue with several points of the article. That said, there is a giant kernel of truth in this piece that gets lost, in large part because of Hunter’s cavalier delivery.

Breaks are necessary, for your life and your creative process. But it DOES get harder to go back to your work the longer you’re away from it. There IS (in my privileged, white, mostly-healthy, middle-class opinion), tremendous value in touching base with your work every single day if you can – whether it’s to write for a few hours or simply read the last three sentences you wrote yesterday and think about them in the bathroom. Whether you’re struggling to find any time to write at all, or struggling to put structure around the writing time you have, there IS benefit in developing a daily(ish) writing habit, no matter how small. Underneath all the silly proclamations that apply only to him specifically, the truth Stephen Hunter is getting at is this: the more consistency you put in, the more you results will get out. 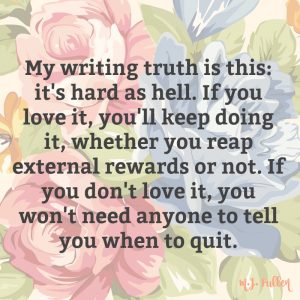 For me, drafting is less about habit and more about momentum. Habit is one way to manage your momentum as a writer, but it’s not the only way; nor is it a purer, more sanctified way than simply writing every chance you get, for as long as you can.

I am constantly pulled between my passion for writing and other forces: the demands of my family life, financial need, laziness, self-doubt, boredom. I actually think Hunter captured the truth of that tension well, even if his conclusions were heavy-handed and misguided.

There are many paths to success in writing. They all require dedication, hard work, persistence and humility. They all require the writer to define what success means to her, and to choose the path that fits best with her life and her goals. In today’s writing world, you get to find your own truth and live it the best you can.

My truth about writing is this: it’s hard as hell. If you love it, you’ll keep doing it, whether you reap external rewards or not. If you don’t love it, you won’t need anyone to tell you when to quit. Not even a Pulitzer Prize winner.