This weekend: Win a REGRETS ONLY Tote Bag and Autographed Copy 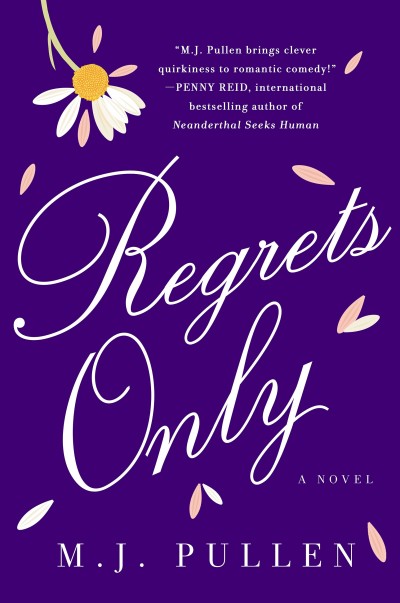 I can’t believe it’s already here! REGRETS ONLY, the popular and highly rated sequel to THE MARRIAGE PACT is coming out on Tuesday, March 1st. For those of you who’ve read TMP, REGRETS ONLY is the story of Marci’s commitment-phobe event planner best friend Suzanne Hamilton, and the crazy circumstances that throw her in the path of a younger man (the wild and stubborn country star Dylan Burke).

Romantic Times reports that Dylan and Suzanne are “incredibly likable, though flawed, and together their friendship-fueled chemistry sizzles.”

The RT reviewer obviously loved Dylan almost as much as I do: “Dylan himself evokes smiles nearly every time he appears on the page, thanks to his wry amusement and, frankly, his sheer dreaminess.”

During the last few days of February, I’m celebrating the release by offering a chance for you to win not only an autographed copy of REGRETS ONLY for yourself or a friend, but also a sweet RO tote bag to carry all your book swag around in!

Instead of the typical Rafflecopter giveaway, I’ve decided to do two simple, fun ways to win:

If you’d rather not wait for your autographed copy, you can order REGRETS ONLY here.

The contest ends Monday, February 29 at 6:00 p.m. EST. (Leap Day!) (BTW, did anyone else see Leap Year, that underrated romantic comedy with Amy Adams and the cute Irish guy whose name escapes me? Ooh! Or The Matchmaker with Janeane Garofalo?)

Speaking of cute Irish guys, don’t forget to follow me on Facebook and Twitter during the 2016 Oscars Sunday night – I’ll be posting updates, rooting for Leo DiCaprio, and drinking Irish whiskey every time a movie with Domnhall Gleeson in it wins anything (he’s in FOUR films up for awards).

I apologize in advance for whatever happens after 9:30.

For more chances to win more prizes, and possibly dish about whatever happened on Oscar night, remember to RSVP for the REGRETS ONLY Virtual Launch Party on Facebook Tuesday night.

See you then. Good luck!

[Edit to add: I’m extending the deadline for this contest through the end of the Virtual Launch Party – Tuesday, March 1st from 8:00 to 9:00 pm EST!]

One thought on “This weekend: Win a REGRETS ONLY Tote Bag and Autographed Copy”