You’ve probably heard the expression, “kill your darlings,” that common writer’s advice derived from the original “murder your darlings” in a 1913 writer’s guide by Arthur Quiller-Couch.* I 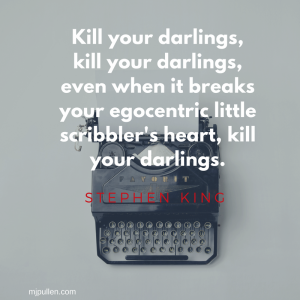 *Who was Arthur Quiller-Couch? I didn’t know either.

Essentially, the idea is that to tell the best story in the best way, writers must often dispose of pieces of our work that are precious to us, but which no longer fit the story as we originally imagined it. Sometimes it’s a hilarious or poignant scene, sometimes a clever line of dialogue. Sometimes (and this is the hardest) it’s the entire reason you started writing this piece to begin with. It’s easy enough to acknowledge in theory that sometimes the path diverges from our original purpose. It’s harder to actually highlight and delete that text, the seed from which our story was born, now overshadowed by the bigger story we discovered.

This is why I keep a “Murdered Darlings” file for every novel I write, so I can cut and paste those pages of text into a safe warm place and tell myself I can go back for them if I need them. I almost never need them.

Today, I’m sharing a bit of the first SUGAR STREET novel that has been particularly hard to part with. Not because it’s the basis for the book (though you could argue that the themes in this passage do permeate the novel); but because it feels so personal to me. I know both of these women. I love both of these women. In many ways, I am each of them.

So I have skimmed over this passage at least ten times in the editing process, knowing that I need to cut it–it doesn’t belong in that spot in the book and I’m too wordy anyway–but avoiding it, because it rings so true to me.

Well, I can’t avoid any longer. It’s time to put my hands around this passage’s throat and hold it down until it stops kicking. But I’m sharing it here, in the hopes that it might ring true to you, too…

Jess didn’t mind Maizy, particularly. The woman was awkward sometimes, and her excellence at all things kid- and school-related was annoying. It probably didn’t help, Jess thought as she swiped and missed at Parker’s next serve, that Maizy was the picture of everything Jess had failed to be as a parent.

Back when she decided to stay home with the kids and work part time, Jess had imagined a whole world of mommyhood opening up for her. She would make her own organic baby food, use Pinterest to keep her home organized from closets to cabinets, to have regular playdates at the park with other moms. She imagined little Mina, and later Dash, having close-knit friends from the time they were toddlers; and the parents of those friends would become Jess and Tom’s social support network. They would host joint barbecues in alternating backyards, trade off babysitting for date nights, take family vacations together as a big cohesive group.

But it turned out that making friends as an adult was no easier than it had been in middle school. Jess lost count of the number of times she’d excitedly scheduled a play date, only to find she had nothing in common with the other moms except the ages of their children. And the few people she grew to like, including Delia, often had children older than Mina and Dash; or like Carras, had no children at all.

Kids were exhausting. And the part-time work Jess imagined would take just two or three hours a day ended up spread over ten or twelve hours, competing with unending laundry, dishes, and the inevitable disasters that cropped up every time she sat down with her laptop.

When Mina started Mother’s Morning Out at the local preschool, Jess was sure of having three hours of uninterrupted work time, three times a week. But within two weeks of starting the program, Mina began a string of illnesses, presumably from her first exposure to preschool germs, which had her absent from the program more days than she went. By the time Mina’s health had recovered and her immune system was strong enough, Jess was pregnant with Dash and could barely function herself. She needed those Mother’s Morning Out hours for napping, vomiting profusely, and crying in the bathtub. Needless to say, her Pinterest dreams took a far backseat to the part time work she was already struggling to complete for her clients.

She did make organic baby food, once. She got every pot and pan in the kitchen dirty, only to produce about ten jars of food. When Tom got home that evening, his delight that she had cooked turned to disappointment that she had not cooked for the two of them, and they still had to order pizza and do the dishes.

Jess learned that she had to stop reading the mommy blogs, especially the crafty, solution-oriented parenting blogs with tasteful clean designs and pictures of perfect families in quaint woodland settings at sunset. She unfollowed the Paleo moms, the yoga moms, the homeschool moms, and the DIY moms—all the inspiration she had turned to when she was planning what her life would be like. She learned to ignore the themed birthday parties with elaborate sculptures made of fruit in fun shapes, and the super thoughtful hand-stamped Valentines, party favors, Halloween gifts that some moms whipped out on demand. Jess learned that some women were simply wired this way, whether they worked outside the home or not.

Maizy was, Jess suspected, one of these. She was not only the PTA president and the best, most prolific baker in the county; she volunteered at the school constantly, and served as a substitute teacher. It was completely unfair for Jess to resent Maizy’s genetic predisposition for super-parenting and school involvement. But there was something perfect and smug about Maizy Henricksson. And her perfect, smug brownies.

This is a deleted excerpt from the novel SUGAR STREET, which will be available August 7, 2018.

Sign up here to be notified when the book is available for pre-order (click on “updates” or “book announcements.”)

M.J. Pullen is a distracted writer and the mom of two boys in Roswell, Georgia, where she is absolutely late for something important right now. Her books include quirky romantic comedies and playful women's fiction. She blogs erratically with writing advice, random observations, and reflections on raising very loud kids and dogs. Join her Distracted Readers newsletter list for updates, free content, giveaways and more.