Skip to content
Update from M.J. + New Free Short Story
The Spiritual Balm of the Dollar Theater and Justin Timberlake

Can I be honest? As I sit down to bid farewell to 2016, what I feel the most is… exhausted.

This has been a hard year for the collective “us” in so many ways: Brexit, the horrors of civil war in Syria, attempted coup in Turkey  the U.S. presidential election (not to mention the fallout of that election on families, personal relationships and international politics). Personally, I’ve never had such a visceral reaction to an election, never felt so unnerved by both the results and the sentiments expressed by friends and neighbors along the way. I found that I had to create a protective shell from social media for myself just to function.

In 2016 the literary world said goodbye to Harper Lee and Elie Wiesel and Pat Conroy. All three have influenced who I am as a writer and a person. And maybe it’s a factor of middle age, but the cultural icons of my youth seemed to take an especially hard hit this year. In 2016, we lost David Bowie, Alan Rickman and Carrie Fisher. The Goblin King, Severus Snape and Princess Leia. (Also R2-D2 and Admiral Ackbar for those tracking the Star Wars universe). Plus, Prince and George Michael and Glenn Frey and Leonard Cohen and Merle Haggard. The mixtape of grief practically writes itself.

On a more personal level, 2016 was my first full year as a combination parent, novelist and full-time corporate employee. For the most part those have all been rewarding roles for me, but making it all work (well, sort of) was more than a little challenging. I won’t lie to you, it’s been a strain on me and our family. I get up at 4:30 every morning to write until it’s time to get the kids up and ready at 6:00. I drop them off, commute for well over an hour, work a full day, and commute back home. We try to cram dinner, homework, baths, stories and some semi-quality time together in the next hour and a half — as the kids melt into impulsive, whiny balls of chaos. I fall into bed shortly behind them and it all starts over. Hubs is incredible and supportive – he works equally hard and fills in all the gaps; plus he keeps me going when I’m ready to give up. Which, I’ll be honest, is pretty often.

People ask me how I (we) do it all, and the straight answer is that I don’t. I have missed a lot this year: passed on countless volunteer opportunities, writing groups, and social occasions and even family gatherings in order to get everything done. Or not. Sometimes our family misses things because we desperately need time together, just to heal the strains of the daily grind on one another. Sometimes we simply drop the ball. We’ve dropped a lot of balls. Sometimes we’ve been forgiven by those we love, and sometimes not. Our house is always a mess, working out is largely a distant memory, and we eat more fast food and pizza than I’d care to admit. It’s not easy, but I can’t let go of the dream. Not yet. 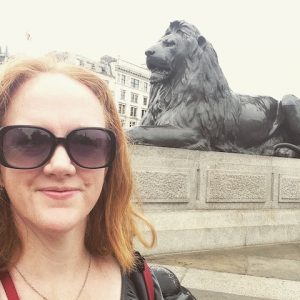 And there have been some major bright spots this year, too. Both Regrets Only and Baggage Check were published in 2016, and I got to do several fun bookstore events related to each of them. I was nominated for the Georgia Author of the Year Award in romance, and while I didn’t take home the very cool candy dish prize, it was fun seeing new friends and old at the awards ceremony. I attended the Dahlonega Literary Festival in March, where I got to hang out with several of my author heroes, who have now become friends. I taught at the Atlanta Writer’s Conference in May, and attended both the Canton Festival of the Arts and the Decatur Book Festival as an author for the first time in 2016.

I was also privileged to be able to return to England this summer to attend an Arvon course at Lumb Bank, and to do some touring and research for the book I’m working on now. I made some amazing friends and can’t adequately describe how wonderful and helpful the experience was. (Though I did try). My critique partner and friend Emily Carpenter and I launched the Draft House this year, an accountability and support program for authors. It’s going really well and I’m excited to see where it leads our hard-working drafters.

Our family is healthy and mostly happy, a blessing I try to count every day. The people who matter most are hanging with us through all the trials and tribulations, and are understanding when we have to change plans (or leave the party at 9:00 p.m. because we are super lame). Our boys astonish me daily with their wit and hilarity and capacity for love. And while our beds never get made and we may be filing an extension on our taxes, we do manage to squeeze in quite a bit of fun.

We took the boys to Washington, D.C. this spring, braving the long car ride to visit a few friends, and most of the monuments and museums. We also went Opening Day at Nationals Field, which checks another MLB stadium off our family bucket list. We walked and took the subway almost everywhere, which was a cool experience for our very suburban children. Even though they often complained of boredom and aching feet, they had a blast. I love that the kids are old enough to understand and appreciate history, art and social activism — at least in their own way.

On the other end of the vacation spectrum, over Thanksgiving break, we ponied up the cost of three years’ normal vacations and took the boys on a once-in-a-lifetime Disney cruise. This is a weird and wonderful vacation phenomenon (if you’ve been on one, perhaps you know what I mean). It wasn’t our typical vacation: we are more of the adventure travel/camping/visiting friends ilk. But this year, spending a few days being pampered and cared for, and having the boys constantly entertained, was exactly what we needed. It gave Hubs and me a chance to say “yes” a lot, and the four of us a chance to reconnect in a way that has sustained us for weeks afterward. Also, someone else made the bed, so there’s that.

2016 has certainly had its joys and hardships, and as 2017 approaches, I am hoping it will be equally fulfilling, if somewhat less eventful. I also hope to see you here more often as a result. Please stay tuned for new stories and updates; and in the meantime, I wish you a peaceful and happy new year.